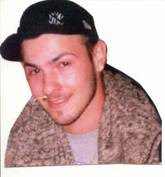 On Wednesday, July 2, 2003, Joshua Wayne Crawford was found murdered in his apartment at 6949 Exeter Court at Kingsbrook Apartments in Frederick, Maryland. Crawford was found bound with duct tape when deputies responded at 12:42 pm. The cause of death was ruled asphyxiation and it was his 21st birthday. The crime appeared to be victim specific and upon investigation, it was determined that a Peavey 6 String Predator Electric Guitar with a hunter green base, chrome, a black neck and whammy bar was missing from the apartment. Was Crawford killed for the guitar?
His mom Terry Horman said she is convinced that someone will be prosecuted for her son's death but she has lingering
questions about his last moments.
"I do battle with the visions, the theories of how the murder went down," she said. "Did he suffer? Or was he taken instantly? I can just imagine. It stays with me every day."

If you have any information regarding these cases, please call the Sheriff’s Office Tip Line at (301) 600-4131. Every tip that is received is investigated and you may remain anonymous. If you would like to speak with an investigator concerning one of the cases, please call (301) 600-3660.
Posted by Cold Case USA Crime Scene USA at 6:04 AM